NaNoWriMo, past and future attempts

I have NaNoWriMo on the brain.  I guess I am just psyching myself up for the upcoming start date.  I am thrilled to be doing this again, as it helps me get a story out that had seeded itself in my mind.  And it’s a great exercise, as well!!

I thought I would like to write a bit about my past, and possible future attempts at Nation Novel Writing Month.  So, here it is, for any and all to see.  A bit of my ups, and downs while writing 50,000 words.  The amount, more or less, in a short novel.

The first year I attempted, which was the only year I completed it, was 2007.  The whole year, and a bit of the year before, I had this odd story in my head.  It all started around Christmas 2006, as I can trace it back.

That year, I was pretty sick around Christmas time.  Christmas Eve, my sleep was plagued, a bit, by what I like to think of as fever dreams.  My dreams, then, were odd, and fairly vivid.

These dreams involved a young Japanese girl, who became my heroine named Mizuki, and warring factions of Japanese Yokai (a supernatural being).  The two factions were the Tengu and the Kappa.

My dream showed the young girl falling under attack by fearsome Kappa, only to have the Tengu come to her rescue.  The dream was basic, but, it laid the ground for a larger story.

Everyday for thirty days, I wrote of Mizuki and her friends and family.  Relationships became entwined, and grew apart.  Villains and heroes formed, and the story, for the most part, went in it’s own direction.  Things really did happen to these characters, that weren’t originally in my plans!

It was actually pretty magical, for the story to take shape on it’s own.  To me, NaNoWriMo was a novel idea (no pun intended).  It allowed a procrastinating amateur writer to actually get something done.  I was thrilled beyond belief when, on November 30th, I had written a bit over the 50,000 word goal!

2008 rolled around, and no story really seemed to plant it’s seed in my subconcious.  I knew I had many months to prepare, so I thought long and hard, but nothing really came up.

Sometime that Summer, though, I found myself (repeatedly) listening to Help! by The Beatles.  It was a favorite CD of mine to listen to while I did the dishes.  I noticed that the songs on the album, if rearranged a bit, created a story.

So, I had my idea.  The story didn’t have a real basis.  Not like the previous one did.  I had an outline which was made of the tracks of the album rearranged to make a story.

When the time came to start writing, he story flowed pretty well.  It was a love story (as some of the songs on Help! lent themselves well to that type), and the characters began to take on lives of their own.

However, as the month trudged on, it became harder and harder for me to form a good story.  I reached a dead-end.  It wasn’t writers block so much, as it was me losing interest in my own creation.

This year, my inspiration came from MANY odd encounters on the chat site Omegle.  I actually started writing the story not long after those encounters, but soon forgot about it.  I believe that was procrastination or the fact that I knew NaNoWriMo was not long in coming.

Well, when my computer died, and I lost all the files on it, I took it as a sign that I wasn’t meant to write that story until November brought NaNoWriMo to me.  A sad part of that whole affair is, though, that I lost the copies of my other attempts.

I always meant to revisit both of those stories, at some point, and do a lot of work on them.  However, that is no longer possible, so I am going to have to put my all into writing this new one.  Wish me luck!

I mention it, again and again, how much I enjoy web comics as an entertainment media. I try to update my links with comics that have piqued my interest. This post, though it might end up being short, is for that reason.

I have recently become completely obsessed with another web comic. And by obsessed, I mean obsessed. This comic has been running since 2003, and I read 600 pages of it the first day I started reading. 600 in one day! That’s quite a lot of sitting–and sleeping arse time, too!

This comic is called Questionable Content. It is basically the life of this indie rock loving guy and his friends as they cope with many things that life throws their way. It was great to read through (the current panel count is 1410!!), and get to see how these character–and their artistic representations–evolve. The artist, Jeph Jacques, really has gotten so much better!

I was sad when I got to the last page, and am currently eager to see what’s next in the comic itself. I always seem to do this… I get obsessed with a comic, and read it until I am caught up. I should learn to pace myself.

While I wait for Questionable Content‘s new comics (it does update 5 days a week!), I am reading another comic called Octopus Pie. This is the about a Chinese-American girl who lives in the Brooklyn. It was recommended by Jeph in one of the QC comics, and it is quite good, as well.

I am trying to pace myself here. I have only read 100 pages worth. I guess that’s not really pacing. Whoops…

My sister and I spend the better part of this week going to every store in Plattsburgh looking for one item: a Wii Fit. Every time we asked no store had one in stock. We even called a Wal-Mart store that was 50 miles away, with no luck. That didn’t seem to stop us from looking, though.

Today, however, our local Wal-Mart had them in stock. My sister excitedly bought one, and brought it home. I didn’t care, either way, about playing around with it, really. She was particularly excited about it, as it seems to be a decent means of exercise in these cold days.

As she was setting it up, I toyed with the idea of creating a profile. I really didn’t needing a video game peripheral to tell me what I already knew about myself. Yes, I am a fat guy. I have no real issues with it, myself. I just didn’t want it to be displayed on the TV screen.

After watching my young nephews set up their profiles–and seeing that it didn’t display your weight unless you opted to see it–I decided to give it a go. Before I even stood on the thing, though, I was sure I wasn’t going to enjoy it.

The balance board that runs with the Wii Fit software measures your center of balance–mine is slightly to the left, if you are wondering–and your body mass index. It plumps up your poor little Mii until it looks like…well…you. It takes these readings, along with your actual age and height, and gives you a Wii Fitness age.

Mine was 41. That’s 13 years older than I am. After being chastised about my balance issues, and Wii Fit Age, I came up here to sulk. I listened, though, as my sister was obviously enjoying herself while playing some of the games (called “training” on the software).

I wandered back down to see what she was doing. She was stepping on and off the balance board in time with a whole group of Miis. This was only the second game she has played (and one that I cannot keep in time with, because I am so uncoordinated–see my Guitar Hero post).

She showed me a game which requires that you hula hoop, and asked me to try. So here I was, standing on a plastic board in the middle of the floor, gyrating my hips like there was no tomorrow. And, you know what? I actually enjoyed myself while doing it.

So, putting aside the horrors of having a video game telling you how unfit you are–I KNOW ALREADY!, and the fact that you might look a fool, gyrating as such, the Wii Fit is actually pretty fun. In the long run if it actually does help shed some pounds, it might just be redeemed as a viable piece of exercise equipment.

Something about the web that I greatly enjoy, are it’s vast amount of web comics.  I absolutely love to read them.  Well, certain ones.  I haven’t read all of them.  That would just be absurd!  I do have a few comics that I read which aren’t in my links.  That will soon be rectified.

If there is a comic that seems to catch my interest (Cyanide and Happiness comes to mind), I will go back to the very first posting, and read it all the way through.  Usually the very day I discover it.  To catch my interest, webcomics don’t have to have the best art.  Some of the ones I like are actually rather simple.

I also like photo comics.  One of my favorites is actually made with “Star Wars” action figures.  It’s called Yak’s Pub.  It happens to be a WordPress blog, as well.  Niktom does some very interesting things with those figures!

I have even done a webcomic, albeit wasn’t that great.  I ran an introductory panel, and a first actual comic panel.  It was entitled “War-Mart”.  It was a crossbreed of Wal-Mart and “Star Wars”.  My years of working for the evil retailer influenced it.  I will post them below. 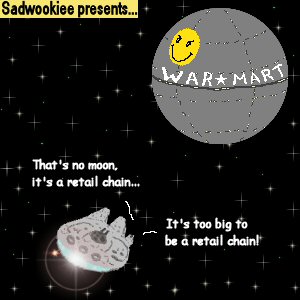 A ship, not unlike the Millenium Falcon, approaches War-Mart.

The War-Mart employee is obviously a Wookiee. This is based on the Empire

That is the spawn of my imagination.  I think I tried to be simple, but ended up a bit too detailed.  And none of the work was done on the computer.  All hand drawn, and scanned.  I need to get with this technology so I can work on this idea that’s been kicking around the ol’ noggin.

Look for a list of some of my favorite comics in the links section.